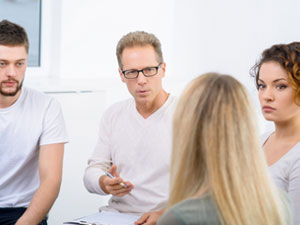 THE WORKPLACE — After several seconds of deafening silence, Dennis Herblemann realized the circle of people standing in the break room must not have heard him.

So, he tried again to weave the same exact joke — verbatim — back into the conversation in a natural way.

“… It’d be called a can’t opener!” said Herblemann, a 34-year-old who routinely does explicit work-conversation prep in the car his way to work.

In a second crushing blow, Dennis once again received stone-cold silence from his colleagues, who were presumably still brooding over last night, where everyone had to stay 20 extra minutes so Susan could finish making copies.

“Honestly, all this says to me is ‘Dennis, nobody likes you or wants to spend any time with you,’” said Herblemann, who has worked at this company for 13 years.

“Back to the drawing board!”

Meanwhile, Trey — the new guy in accounting — came out guns blazing in his first week back since flying to Vegas for a poker tournament.

“So then, me and my buddy Jack, both absolutely plastered, won $60k in one hand, from the toilet. Talk about a fuckin’ royal flush, am I right?” said Trey, who might be under 30 according to workplace rumors.

Of course, workplace colleagues were incredibly receptive to Trey’s Vegas routine and at one point appeared to actively tighten the break room circle in an effort to squeeze him out.

Then, Trey did the unthinkable.

“Yo, guys, here’s another classic: What do you call a can opener that doesn’t work?”